This is a slightly different view of M42, the Orion Nebula. This narrowband image was captured with an Atik One and 200mm f/2.8 lens using 4 x 10min and 6 x 2min hydrogen alpha frames for the red channel, 4 x 10min hydrogen beta for the green, and 4 x 10min OIII for the blue.

These pictures of the Orion Nebula (M42) and the Monkey’s Head Nebula (Sh2-252) in Orion were taken on 6th February, using an Atik One with hydrogen alpha filter through the ED80. M42 was put together from 10 x 300s, 10 x 90s and 10 x 30s with some HDR trickery from PixInsight to bring out the detail in the fainter parts of the dust clouds. Sh2-252, aka the Monkey’s Head Nebula, was from 10 x 300s, again with some PI magic to put some colour into it.

From a couple of nights ago, here’s an attempt at an HDR image of M42, taken with the Atik 460 and IDAS LPS filter through the MN190. It’s put together from 18 x 300s, 9 x 120s and 9 x 30s frames. Initial calibration and stacking were done in ImagesPlus, all the fancy HDR stuff was done in PixInsight, with some final tweaks in Adobe Lightroom.

It’s one of the most photographed objects in the night sky, but it’s still one that everyone likes to have a go at from time to time! It’s bright, which makes it easy to capture an image, but has a very wide range of brightness, which makes it difficult to capture well.

This image was captured using the MN190 and Atik 314L+. It’s an LRGB image made up from 18 x 30 seconds through each filter, and pieced together in ImagesPlus.

No winter season would be complete without an image of the Orion Nebula, and what better time to do it when there’s a full moon close by in Gemini!

Taken through the ED80 with the Atik and narrowband filters, this image was composed from 12 x 5min H-alpha (mapped to green), 11 x 5min OIII (blue) and 11 x 5min SII (red). Although the central core of the nebula is overexposed – and it’s almost impossible to avoid without some fancy Photoshop work on compositing frames of different exposure times – there’s still a pleasing amount of detail present in the faint out reaches of the nebula, thanks to the hydrogen alpha filter. 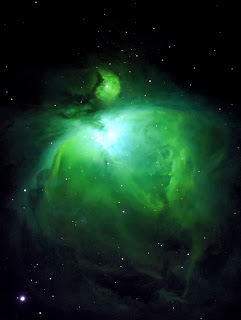 I finally got round to connecting up a dual scope set up – the 8″ LX200R and the Equinox ED80 side by side. This is a shot taken through the ED80 with an unmodified EOS 400D: 12 x 2min at ISO800, captured and processed with ImagesPlus 3, then tweaked in Adobe Lightroom to bring the colour out a bit more. The setup was guided using GuideDog with a ToUcam through the LX. I’m reasonably pleased with how this one came out for a first attempt at using guiding, and I would have done more if a thick layer of dew hadn’t suddenly formed on the LX! 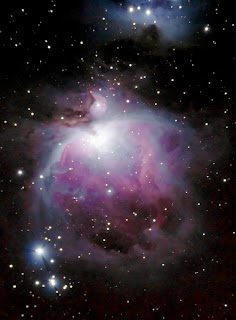 Clear skies again tonight. This is shot taken with my little-used Atik 2C. The final image is a stack of 42 separate exposures of either 2, 5 or 10 seconds duration, taken through the Equinox ED80. The individual frames were then processed in Images Plus v3.
Not a great picture, but I guess it’s maybe not too bad for an 8 bit camera like the Atik. 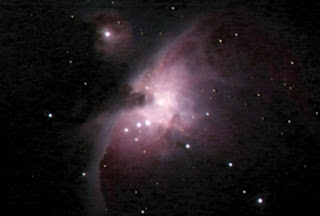 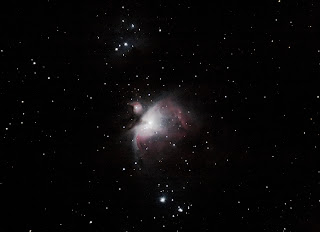