I’ve always known that it’s a bad idea to go visiting astronomy shops, but sometimes you just can’t help yourself. Last Monday I went to visit the Widescreen Centre’s new place near Ely and came out with a William Optics GT-102… So here are some first images from last night, taken with an Atik 460ex OSC. There’s comet C/2017 O1 ASASSN which is lurking near Polaris, and getting quite faint now, by the looks of it. And then there’s the Double Cluster, M37 in Auriga, and the Crab Nebula… I still need to optimise the spacing of the camera from the field flattener, but I’m hoping for some nice images from this scope

Last night was the first moon-free chance I’ve had for a while to use the Atik 460ex, so I turned it on to M1, the Crab Nebula. Taken through the MN190, this image is comprised of 18 x 3min exposures, and processed in ImagesPlus 5.0. I’d have liked more photons, but a very uncooperative bank of cloud rolled in and cut the session short! I used a CLS filter because of the light pollution I have, but I need to experiment shooting without the filter to see if I can get better colour balance and saturation.

An image of M1, the Crab Nebula, taken with the Atik 314L+ with LRGB filters through the MN190. This was put together using 12 x 5 min luminance exposures (CLS filter) and 12 x 1 min, binned 2 x 2, for R, G and B. I was quite pleasantly surprised by the amount of colour in the stars I picked up, so decided to turn it from science into art by pushing the saturation way too high. It’s quite pretty though 🙂

Last night was the first chance I’ve had in what’s seemed like ages to get out into the observatory and do some imaging – so what if it was Christmas Day!
I chose to have another attempt at the Crab nebula, which I tried briefly withthe ED80 a while ago. On this occasion, I used the Atik on the 8″ LX200R, with Baader narrowband filters. I took 12 x 5min exposures through each filter, and combined them using the Hubble palette (red=S, green=H alpha and blue=OIII) in ImagesPlus. I could really have done with taking some flats; they don’t seem to be needed with the ED80, but the long dew shield I have on the LX makes a difference, and I’ve tried to process out the gradient caused by the shield, with partial success. 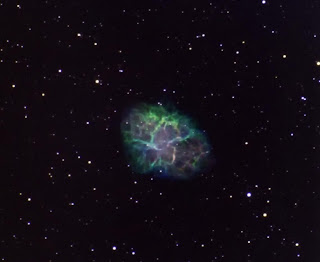 I thought I’d try the Crab last night through the ED80, as the camera was already attached to it. I was expected a fairly small image, and sure enough, that’s what I got! However, it’s encouraged me to have another go with the LX200 before long!. This was taken using the narrowband filters – the full moon wasn’t very far away – and the colours have been mapped using the Hubble palette of red=SII, green=Ha, blue=OIII. 10 x 5min though each filter. 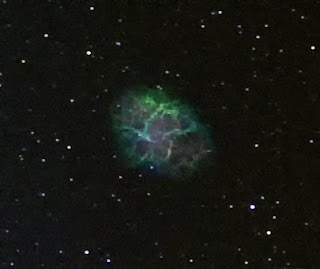 I got chance the other night to add some more frames to the Crab Nebula shot, and play about with the processing a little bit more. This is now a stack of 67 x 3min exposures at ISO 800, acquired and processed with Images Plus, with final tweaking in Photoshop. The difference between this one and the previous one is substantial, and it’s not just to do with the processing; the message is clear – the more photons the better!! 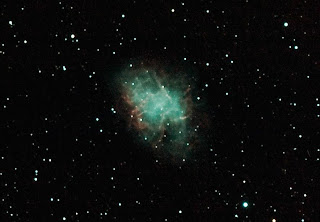 Last night (3 Jan) was decidedly cold, but I wrapped up warmly to brave the elements for a couple of shots using an Astronomik CLS filter that I’ve had for a while, but never really been able to do justice to.

Both images were taken through the LX200R without focal reducer using my Canon 400D with CLS filter. In both cases, dark, flat and bias frames were used to calibrate the light frames in Images Plus.

First up is M38, a large, bright open cluster in Auriga. This is a stack of 25 x 3min frames at ISO 800, and although I seem to have lost colour in the stars, the background light pollution gradient that I’ve been plagued with recently is conspicuously absent. Focus was also slightly off, which makes the stars seem slightly more bloated than they should be. 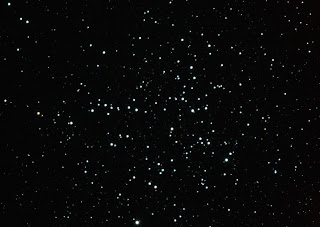 I then had just enough time before the moon rose and washed everything out to have my first ever attempt at the Crab Nebula, M1 in Taurus. This is a stack of 30 x 3min exposures at ISO 800, and would have benefitted from more exposure time, as there’s still appreciable noise visible in the image. I may try and add some more frames in the near future if I get chance. 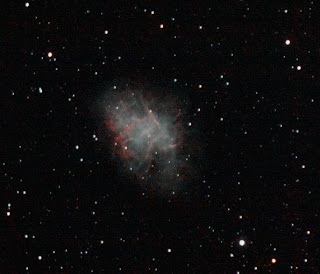